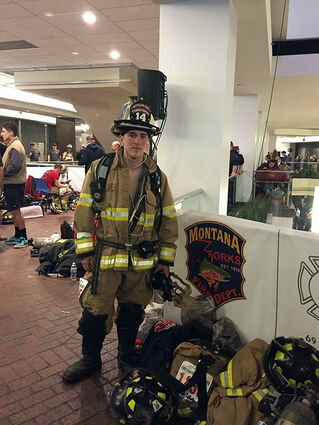 Pictured is Charles Eastty at the 2016 LLS Firefighter Stairclimb in Seattle.

The Three Forks Volunteer Fire Department will be well represented at the 32nd annual LLS Firefighter Stairclimb scheduled for Sunday, March 12, at the Columbia Center in downtown Seattle.

To raise money in support of the Leukemia & Lymphoma Society, Captain Charles Eastty, Captain Cheryl Carrasco, and Firefighter Chase Moore will ascend to the top of the fourth tallest skyscraper west of the Mississippi River in full turnout gear weighing over 60 pounds. They will also be using a self-contained breathing apparatus (SBA).

Eastty is no stranger to the event, also known as the Scott Firefighter Stairclimb, having made it up the 69 flights of stairs as a Central Valley Fire Department member in 2014 and with the TFVFD in 2016. Carrasco also was part of the 2016 team, and both did a virtual climb of the tower in 2022. Three Forks had planned to send a team in 2021 and 2022 but did not because of COVID-19 restrictions.

2023 will be the first trip to the event for Moore.

To Eastty, the team captain in 2023, climbing the Columbia Tower is one of the hardest things he has physically done.

"We climb 69 flights of stairs, in full firefighter gear, on air. You might think that 69 flights with an added 60 pounds of gear is doable. But we are required to wear full firefighter structural gear that is designed to keep the heat out. Well, it also keeps the heat in. And if you add an SCBA (bottle and mask) on top of that, it can feel claustrophobic as your gasping for air that you can't get enough of," said Eastty. "The bottom line is it is a really tough event. But the reason we do it is because fighting blood cancer can be so much harder than what we experience in that stairwell. There are so many people battling blood cancer every day, and we do it for them. So that one day the LLS will find a cure and further blood cancer research."

Regarding training, Eastty said they are all volunteers, and it is difficult to schedule workouts between family, work, kids, and fire calls and training. Eastty added he would be playing catchup the next few months to get ready for the climb with lots of cardio and leg days.

"The hardest thing during the climb is controlling our breathing while on air. So, many of our team members will work out with an SCBA pack or a high-altitude mask to improve our breathing function and overall fitness," he said. 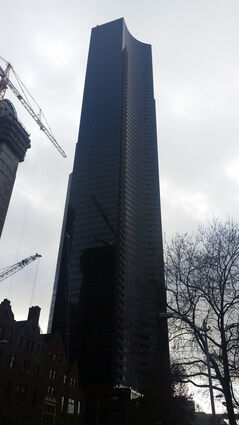 Pictured is the 76 story Columbia Center in Seattle.

The three local residents will be among the 2,000 career, volunteer, or retired firefighters who will climb to the top of the Columbia Center.

As of press deadline, the team had raised $2,966 of their $4,000 goal to attend the event. Eastty said the best way to donate to help them make the trip is to donate online is to go to http://www.llswa.org, clicking on firefighter stair climb, and looking up the Three Forks team.

He added they would also plan a few fundraisers, including a pint night at Bridger Brewing.