The Three Forks High School Girls' Basketball team picked up a huge road win last week with a 46-44 victory on January 10 against Class A East Helena.

"It was a pretty great night for the Lady Wolves. That was a huge win. The East Helena girls have been playing together for several years now, and it was almost the same team we saw last year," said Head Coach Lacy Noble. "I think that shows that the girls are playing more as a team now and helping each other when they need."

Following the game, Noble said the win shows the girls are playing more as a team now and helping each other out when they need it. 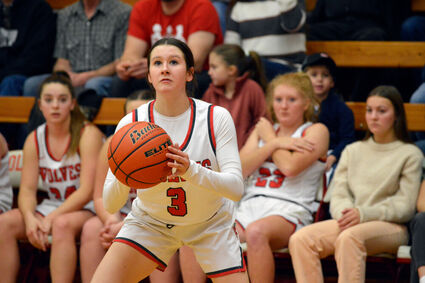 Pictured is Tanaya Hauser in action earlier this season against Townsend. Voice photo by Melissa Jenkins

"They are also learning each other's strengths and playing into those. We went into the game looking to improve on a couple of areas from the weekend before, but the girls did so much more than that. They were a team hungry for a win and went after it," Noble said. "Winning these close games is a big confidence booster. We did miss the front end of a couple of one-and-ones in the final minute, and it would have been nice to have a bit more of a cushion in the final nine seconds, but the girls played smart on the defensive side. We are going to have to be creative with ways to get the victory with our small team. I'm glad their work ethic is so huge."

In other action last week, the Wolves fell 53-23 on January 14 against visiting Manhattan Christian.

Three Forks will host non-conference foe Columbus on Friday, January 20, and will travel on January 21 for a conference game against Big Timber.