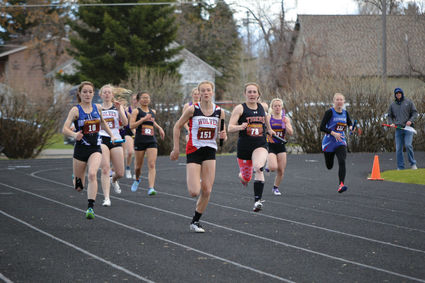 Jasmyn Murphy breaks away from the pack.

Ten athletes will represent Three Fork High School at the Class B State Tournament scheduled for Friday and Saturday in Kalispell.

The athletes qualified by finishing in the top eight at last week's Southern B Divisional Meet in Laurel or during the season with a state qualifying mark.

The Wolves boys team finished seventh out of 16 scoring teams in Laurel.

Payden Lynn was fifth in the 200, second in the javelin and triple jump. He will also compete at state in the high jump and long jump.

Bryce Olson finished second in the pole vault and eighth in the long jump. He will also be competin...