For the fourth straight year, the Three Forks High School boys basketball team is headed to the Southern B Divisional Tournament in Billings. The Wolves qualified for the tournament with a 50-47 win Saturday at home over Big Timber to finish third in third place at the 5B District Tournament. It was the second straight elimination game win for the fourth-seeded Wolves, who knocked third-seeded Boulder out of the tournament Friday with a convincing 75-56 victory.

Three Forks will open the Divisional Tournament Wednesday, March 3 at 5:30 p.m. with a matchup against the top seed from 4B, Huntley Project.

Following the win over Big Timber, Wolves Head Coach Terry Hauser praised his team for picking up the two consecutive victories that followed a 59-35 semifinals loss Thursday at Manhattan.

"We talked about trusting the process all year long, and here we are going to Divisionals. The kids kept buying in and buying in. Last night was so impressive to bounce back like that, it was probably our best game all year," Hauser said. 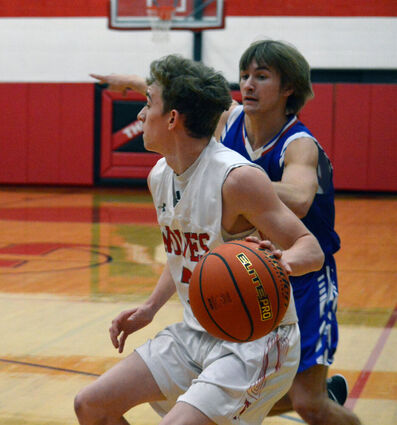 It was a tightly contested opening quarter, with Three Forks taking a 13-12 lead at the end into the second. The second quarter was another back-and-forth affair. With the game tied at 22-22, Jacob Buchignani would put the Wolves up 25-22 at halftime when he banked in a three-pointer at the buzzer.

The third quarter would belong to Three Forks, who outscored the visiting Herders 17-10 to take a 42-32 lead into the final quarter.

Big Timber would make things interesting in the fourth when the cut they cut the lead to 50-47 10 seconds left in the game. The Herders would miss a three-pointer with time expiring to give the Wolves the win a trip to Billings.

It was a big night for Buchignani, who led the Wolves with 17 points.

Austin Allen was also in double figures with 11, and Owen Long added nine. Shane Williams and Walker Page each added four, Mayson Shively finished with three, and Collin Stone ended his night with one point.