Following last week's regular-season finale against Whitehall, Three Forks High School girls basketball coach Mike Sauvageau was hoping some of the positive things he witnessed would carry over to this week's 5B District Tournament. His hopes came to fruition Tuesday night with the Wolves picking up an impressive 33-18 road win at Townsend.

The fourth-seeded Wolves will play Thursday, February 25 at top-ranked and undefeated Big Timber.

In action last week, Three Forks fell 43-27 Friday at Jefferson High School in Boulder. The Wolves opened strong taking an 8-5 lead at the end of the first quarter before the Panthers answered back strong in the second to take a 23-14 halftime lead.

On Saturday, Three Forks led Whitehall 8-7 at the end of the first quarter and had a 28-26 lead in the middle of the third quarter before the Trojans stormed back and left Wolves gym with a 53-37 victory. 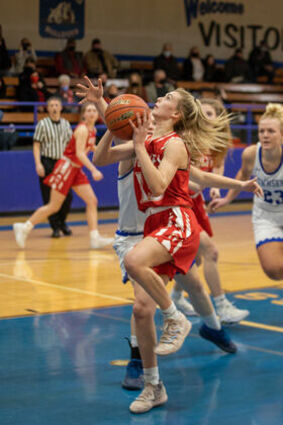 Sauvageau said his team started strong both nights, but they can't have situations where they have turnovers on four straight possessions and let the other team convert those into layups as they did against Whitehall.

"But I was proud of the girl's effort. I don't like to say moral victory, but we definitely improved this week, and hopefully, we can feed off this next week," Sauvageau said.

Jasmyn Murphy led the team in scoring against Whitehall with 11 points.

"Jaz had a good night. When she does that, that is why we stay in games," Sauvageau said.

Jayden Woodland was also in double figures with 10, Ashlyn Swenson finished with nine, Kinzee Howey added four, Lily Jones finished with two, and Brianna Warren chipped in with one point.

Woodland led the team in scoring with 12 points. Warren, Swenson, and Murphy each had four. Jones added three points.