A furious second-half rally by the Three Forks High School boys basketball team fell just short in a 65-59 loss to the top seed from 4B Huntley Project Wednesday night in an opening-round game of the Southern B Divisional Tournament.

The Wolves trailed 44-24 in the third quarter and 52-38 in the fourth before storming back into the game and pulling as close as 56-53 with two minutes left after consecutive three-pointers by juniors Owen Long and Austin Allen.

The third seed from 5B, Three Forks will next play Friday, March 5, in an elimination game against the loser of tonight's matchup between number one ranked Lodge Grass and conference foe, Townsend. The game is scheduled to take place at 11 a.m. at Lockwood High School.

Following the game, Three Forks Head Coach Terry Hauser said his team was tentative and kind of just watched the game in the second quarter and to start the third. During a time out early in the third, Hauser told his team that if they cut the lead to 10 or 12, they would have a chance.

The Wolves came out of the gates strong, taking a 6-2 lead after Long and Allen three-pointers. Huntley Project would storm, capitalizing on offensive rebounds to outscore the Wolves 10-2 the remainder of the first to take a 12-8 lead into the second quarter. 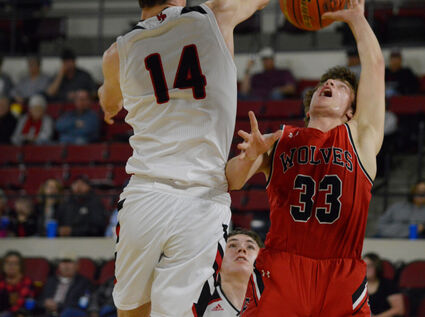 Mayson Shively goes up for the shot in Wednesday's game against Huntley Project. Voice photo by Melissa Jenkins.

The Devils would continue their run to open the second, outscoring Three Forks 19-11 to build a 33-19 lead going into halftime.

The Wolves would pull to within 35-24 early in the third quarter before a 10-0 Project run upped their lead to 44-24. Three Forks would battle back and chip the lead to 46-33 after an Allen three-pointer.

The Devils would score the quarter's final basket and lead 48-33 at the end of three.

The Wolves would score the first five points of the fourth on a Long three and Allen basket to make it a ten-point game 48-38. The Project would answer right back with four straight points to go up 52-38 before the Three Forks fourth-quarter rally.

Three Forks was led in scoring by Allen with 20, and Long had 19. Jacob Buchignani finished with eight, Shane Williams had seven, Collin Stone had three, and Mayson Shively finished with two points.