Chan Cooper was born at his parent's home in Willow Creek, Montana on August 11, 1929 to Raymond and Frances Buttelman Cooper, on the same ranch where he lived and raised his own family. He "kicked the bucket" (dads own quote), peacefully at his ranch home with family by his side May 23, 2021. Growing up, Chan worked on the family ranch and graduated from Willow Creek High School. Chan always told his kids that the D's & F's on his report cards stood for Dandy and Fine.

On March 3, 1949 Chan married Joyce Britzius at the family ranch. Chan and Joyce raised five daughters and one son, three of which were raised in the log house that now is part of the Museum of the Rockies in Bozeman, Montana. Chan and Joyce always said "After being married for over 62 years, we are just starting to get the hang of it."

In 1953 Chan and Joyce started leasing the family farm from his parents. After the death of his brother, Bill, Chan went into partnership with his father. In 1970 Chan then bought his parents half of the partnership.

Chan raised Commercial Line 1 Herefords. In 1970 Chan won the Certified Montana Replacement Heifer Award at the Northern International Livestock Exposition, plus carrying out range improvement practices and preconditioning of his cattle for many years. Then in 1972 he received a national honor as Commercial Cattleman of the Year; awarded for improving the average calf weaning weight in his cow herd by 85 pounds in 9 years. He also had cattle that won a beef efficiency award in the state of Illinois. In 1979 he was presented with "Outstanding Cattleman of 1979" by the Gallatin County Beef Producers.

In 1989, Chan and Joyce sold the cattle and machinery and leased part of the ranch. They dry land farmed for an additional 5 years. Chan and Joyce also began traveling in their fifth-wheel and spent their winters in the south from California to Florida. They traveled all 49 continental states, all Canadian Provinces and parts of Mexico. In 2001, Chan and his grandson, Chris Barry traveled to the Panama Canal and back in 3 months with a trailer caravan of others.

In 1990, Chan wrote a book about growing up, the neighboring ranchers and the 30 to 40 hired men that came and went over his 60 years on the ranch. It remains unpublished.

In 2004, the family ranch was sold and he & mom remained in the home where they raised their 6 children.

In 2005, they officially became empty nesters. Through the years, Chan and Joyce took in Donna House (who became Donna Fairhurst their niece- in- law) and grandson Chris Barry (whose parents weren't residents of Willow Creek) just so they could attend school there. They also hosted many foreign exchange students from Mexico and Brazil (most notably Lidice who always called Chan & Joyce, Mom & Dad. They always seem to have one of their offspring or grandchildren visiting or staying with them. The more the merrier.

Chan was a member of the Gallatin County Sheep Producers Association, Home Administration, Gallatin County Farm Bureau, Federal Land Bank Board, Stockholder and Director of the Manhattan State Bank for 47 years (retiring at age of 90), member of the American National Cattlemen's Association and active in the Cattle-Fax program, Masonic Lodge of Three Forks and the Methodist Church of Willow Creek. Chan served on the Willow Creek School Board for 13 years and was in the Montana Official's Association for over 30 years, officiating basketball games. 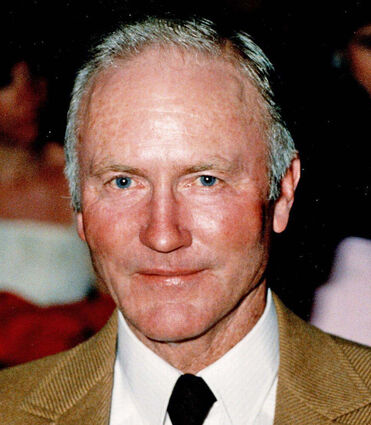 Chan had several living beings named after him - A grandson, a friend's son, a dog in Kansas and a cat in Three Forks. To those who knew him well they can recall his practical jokes, sense of humor, patience, openness, honesty, and physical energy. He never met a stranger as he talked with everyone as if he'd known them his whole life. Growing up his children remember his gentle teasing, his lessons of never lie or there will be consequences, going with him to do chores and learn how to run machinery (some with curlers in their hair for a date that night), milking cows (some of which were more successful than others) and driving before we were 10 (some of which hit a few gate posts), throwing tinsel on the Christmas tree behind your back, running along side to keep up with his fast pace, coming home early on a Saturday morning just to watch Bugs Bunny Road Runner Hour with the kids of which he laughed the loudest, his power naps after lunch, counting everyone in the car whether going to or from an event, and just doing simple things for fun. He never believed in grounding his children as there was just too much space on the ranch to be grounded to and Mom would have run away from home. Some of his lines that all of us can remember: "If you get thrown in jail, don't call until after I've had my breakfast". "Get back on the horse", after being bucked off. If we were out after dark Dad would say to Mom "They'll be home when they get hungry and besides we can't find them in the dark anyway".

He has requested a 15 minute funeral because he never liked to be idle for very long as there was always somewhere to go & things to be done. He has also requested a large celebration after his services to celebrate his long happy life.

Funeral services will be Friday, June 4th at 11:00 a.m. at K & L Mortuary in Three Forks, Montana, with Graveside services & then a luncheon reception at the Willow Creek Fire Hall. Viewing will be all day Thursday & visitation with family and friends from 5:00 to 7:00 pm. In lieu of flowers donations can be made to the Willow Creek Fire Department.