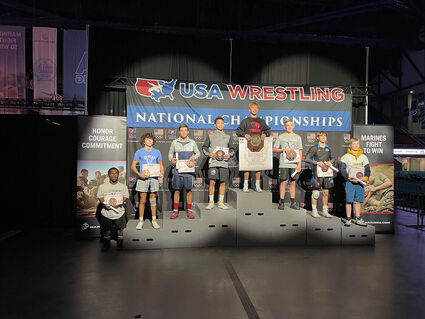 Cole Rogers of Three Forks (third from left) earned his second All-American honors of the year with a fourth place finish at the USA Wrestling 2021 US Marine Corps Junior and 16U Nationals Tournament in Fargo. Courtesy Photo

With a fourth-place finish at what is widely regarded as largest wrestling tournament in the world, Cole Rogers of Three Forks is now a two-time All-American.

The 50th-anniversary Tournament had a record number of participants in 2021, with over 6,000 in the six different divisions.

Rogers was fourth in the 100-pound Greco Roman Junior Division and just missed out on placing by one match in the Junior Freestyle Division. He also made it to the consolation round of eight in the 16U Greco Roman Division.

In April, Rogers earned his first All-American honor with a sixth-place finish at April's UWW Cadet, U15 & Future Nationals Tournament in Wisconsin.

Due to his grandparent's 50th anniversary party, Rogers just missed out on competing in the U16 Freestyle Tournament. He first competed in the Juniors Freestyle Division in Fargo, where he opened with two victories. After losing in the quarterfinals to the eventual champion, he was eliminated one match short of placing with a 15-8 loss to eventual Greco champ Kolter Burton.

Following the first day of competition, Rogers moved on to compete in the U16 Greco Roman Tournament.

After drawing a bye in the round of 64 and winning his first match by pin in 39 seconds in the round of 32, Rogers made the decision he wanted to double bracket and wrestle in both the Junior and Under 16 Division.

According to his mom Michelle, Cole had to cut two pounds before weigh-ins at 4 p.m., so after heading back to the hotel to hit the gym, Rogers was the first to make weight, knowing he would have a 5 p.m. match in the U16 Tournament.

Rogers fell 9-4 in the round of 16 but rebounded strong in the consolation match with a pin at the 3:37 mark. In the consolation round of eight, he was eliminated after losing a heartbreaking 6-6 match by criteria.

Michelle said Cole was super disappointed but did not let it get him down, knowing he had one more Tournament the following day and a final chance to meet his goal of becoming a finalist.

After a bye in the round of 32, Rogers won by pin at the 2:05 mark in the round of 16 and won 8-6 in the quarterfinals. One win away from his goal of the final match, Rogers fell 7-3 in the semifinals.

"I had a lot of mixed emotions. I was proud of myself knowing I was placing at Fargo, and that's huge, but was left feeling unsatisfied with myself in falling short of my goal," Cole said.

Rogers won by pin at 1:03 in the consolation semifinals before losing 12-7 in the third-place match.

Rogers plans on taking a couple of weeks off to spend time with his family and friends but said he could not wait to get back on the mat and wrestle.

"I have a lot of work to do to achieve my next goals of becoming a high school state champion and helping my team win a state title. It's going to take a lot of work," he said.