Montana's worst drought in more than 20 years continues into fall

La Niña is poised - but not certain - to raise average temperatures and precipitation in Montana this winter.

The drought that has dried out soils, drawn down rivers and reservoirs and challenged agricultural producers, land managers, recreationists and wildlife continues to persist as hydrologists anxiously track the progression of the La Niña weather pattern, hoping for a wet winter to start reversing the worst drought Montana has seen in at least 20 years.

During last week's drought and water supply advisory meeting hosted by the Department of Natural Resources, Troy Blandford, water system information officer for the Montana State Library, noted that while some areas of the state - namely the northwest and southeast corners - have emerged from the category of extreme drought into severe drought, trendlines have moved the opposite direction for much of central Montana, particularly Lewis and Clark County and northwest into the Rocky Mountain Front.

"If you look back across the history of the U.S. Drought Monitor, we never reached 100% [severe drought] in those early 2000s - 2017 didn't either," Blandford said, referencing the flash drought that rapidly cured vegetation and set the stage for an intense, expensive fire season four years ago. "Certainly the extent of the drought and the levels of drought are higher than we've seen the past 20 years."

Though October data hasn't yet been incorporated into statewide statistics, Peters said he doesn't expect those numbers to move in the direction most Montanans would like to see - cooler and wetter. Parts of the state, the northeast corner in particular, are 5 degrees above normal for October, he noted. Pockets of the state along the Hi-Line are also in tough shape in terms of precipitation. Peters said Havre received 2.38 inches between June and October, versus the average of 6.75 inches. It's the driest June-through-October period on record in Havre.

Precipitation, of course, contributes to soil moisture, and the outlook is bleak in that regard as well. Nearly all of the state, 96%, is categorized as having short to very short topsoil moisture, a measurement of water volume in a sample of the top six inches of soil. When soil moisture is short, seed germination and crop growth and development can be curtailed. When it's very short, plant growth has stopped or nearly stopped, and plants show visible signs of moisture stress. Plants in these conditions quickly undergo irreparable damage.

By that metric, Montana is in worse shape than any other state In the U.S.

La Niña, an oceanic and atmospheric pattern driven by trade winds and ocean currents that affects climate, could help the state start emerging from the drought, but Peters said he's hesitant to overpromise precipitation at this point in the water year, which officially began Oct.

Current models suggest that November, December and January will net above-average precipitation over the vast majority of the state, with precipitation favoring the western half of Montana. Temperatures are expected to trend above normal as well, even more so in the eastern part of the state.

For now, forecasting models indicate a 90% chance a La Niña pattern will persist through the winter and a "greater than 50%" chance it will extend through the end of April. Models become less reliable the further into the future they look, Peters noted, adding that "last year's La Niña did not pan out - [it] was kind of a dud."

Precipitation-wise, Peters said the state will need an above-average winter and an at least average spring to start pulling out of the drought.

"[There are] no official outlooks yet for this spring, but I'm holding out hope," he said. 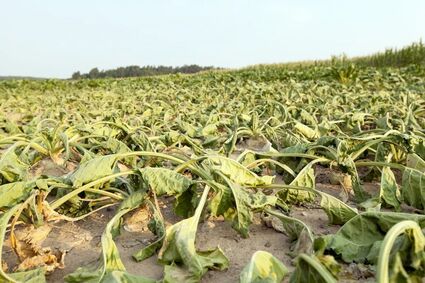 How the state's rivers and streams are weathering the long dry spell varies significantly from watershed to watershed, but in some parts of the state, southwestern Montana in particular, stream gauges are still logging record low flows. Water volume in the upper Yellowstone River is below the 10th percentile. The gauge near Corwin Springs provides especially good data, as it has over 100 years of records and is so close to Yellowstone National Park that little water has been withdrawn for agricultural or other uses.

Last week' meeting is expected to be the last official drought update of 2021 hosted by DNRC, and it comes as the agency launches a revision of its drought management plan. The department announced this summer that it's drafting a new strategy for monitoring and responding to drought conditions, and an Oct. 14 informational meeting marked the official start of that effort. The drought plan was last updated in 1995.