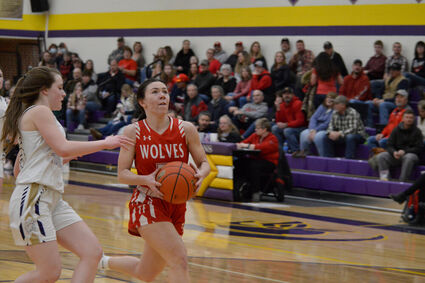 Addie Pestel takes it to the hoop in a 52-24 win over Whitehall. Voice photo by Melissa Jenkins

After a back and forth first quarter, Three Forks would take a 12-10 lead into the second quarter, outscoring Whitehall by eight and lead 27-17 at the half. Leading 35-20 at the end of three, the Wolves dominated the fourth outscoring the host Trojans 17-4 on their way to the lopsided victory.

"If we can defend teams, we're going to have some success," he said.

On the offensive side of the ball, Sauvageau said his team did not shoot well in the first half and missed a lot of "bunnies".

"We had good looks. We just did not shoot it well," said Sauvageau. "It took us a while, but we finally got it going," he said.

It was a balanced scoring attack for the Wolves, with Ashlyn Swenson leading the way with 14 points. 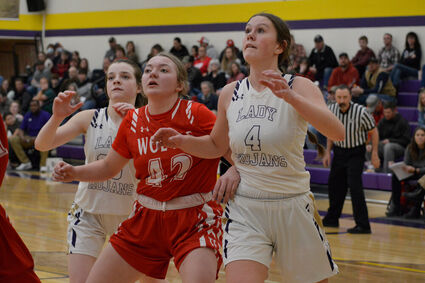 Fallon Page looks to get the rebound in action last week against Whitehall. Voice photo by Melissa Jenkins

"The nice thing about tonight is we got all 12 players in the game, and nine of them scored. That's always a nice night for a coach when that happens. We haven't won here in three years. We didn't play our best, but it was good enough to get the job done," Sauvageau said.

In action Friday, Three Forks fell 52-33 at home against top-ranked and undefeated Jefferson.

Swenson led the team in scoring with 10, Woodland had eight, Davis and Murphy finished with four, Hauser had two, and Pestel added one.

Three Forks will be on the road Thursday at Manhattan and host Townsend on Saturday.