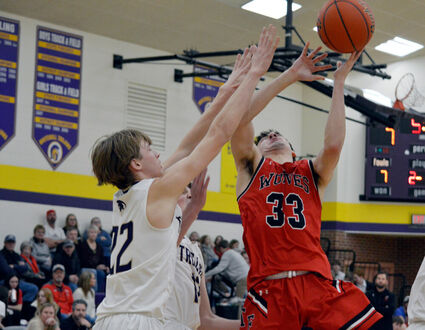 Mikey O'Dell gets fouled in the paint Thursday against Whitehall. Voice photo by Melissa Jenkins

Just moments after 68-43 road win last Thursday over Whitehall, Three Forks High School boys basketball head coach Terry Hauser said there were points in the game and throughout the season where it has been amazing to watch them click on offense. One night later, the Wolves offense took it to another level nearly hitting the century mark in a 96-54 win over Jefferson High School.

Hauser felt the energy was high and the defensive effort was good. He was also happy to get the win away from home.

"Road wins are road wins. Whitehall has gotten better so I was happy with the win," he said.

Three Forks was led in scoring by seniors Finn Tesoro with 14 and Mikey O'Dell with 12. Hauser said the two senior transfers played very well, and it was nice to see them start to feel more comfortable, something the team will need as they enter the postseason.

"They are both such a huge asset. They can both score and defend," Hauser said. 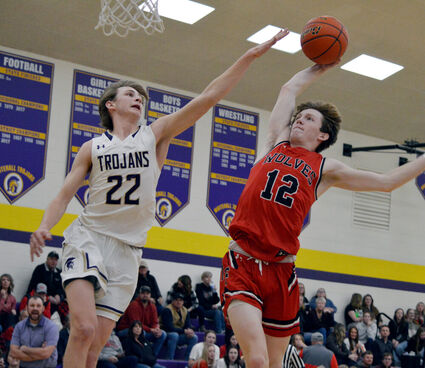 The Wolves came out of the gates strong Friday against Jefferson leading 26-13 at the end of the first and 50-28 at halftime. Three Forks would continue their dominance in the third taking a 74-46 lead into the final quarter.

It was another big night for O'Dell with 17 points. Allen finished with 15, Long had 14, Williams ended his night with 13, and Tesoro was also in double figures with 12. Sam Tesoro added nine, Buchignani finished with eight, VanVleet added five and Koch had three.

"When we are moving the ball and getting open looks, it is nice to just sit back and watch," Hauser said.

Three Forks will be on the road Thursday at Manhattan and host Townsend Saturday.