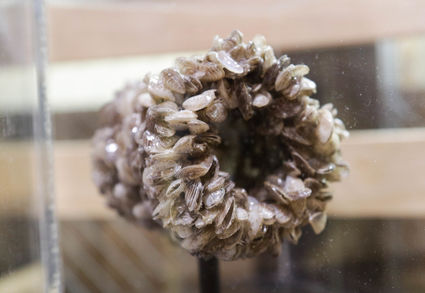 Montana Fish, Wildlife and Parks displays an example of what aquatic invasive species look like. Here, mussels are encrusted on a pipe. Photo by Shaylee Ragar / UM Legislative News Service.

A prolific alien organism is closing in on Montana's ecosystem and could have dire consequences for food production, outdoor recreation and the economy if it crosses the state's borders.

Aquatic invasive species have widely infected the Midwest and are continuing to spread.

Montana Fish, Wildlife and Parks and state lawmakers are racing to protect the state from all invasive species, but aquatic species like quagga and zebra mussels in particular. Proposals include allowing counties to implement new taxes, creating a new fee for boat owners and establishing new boat inspection requirement.

It's a bipartisan effort, and a group of lawmakers met late Friday afternoon to discuss the best ways to fund AIS programs.

"Everybody has a stick in this fight," Rep. Kerry White, R-Bozeman, said during the meeting. White is chair of the House Natural Resource Committee.

The Columbia river system, which flows from Canada to the Pacific Ocean and drains into western Montana, is the last in the United States to be free from invasive mussels. If the mussels invade Montana, they'll likely spread to Washington and Oregon.

A 2019 study commissioned by national and state invasive species councils and the University of Montana Flathead Bio Station estimated the economic damages of AIS to the state if they arrive. It estimated mitigation costs between $72.4 and $121.9 million, another $23.9 to $112.1 million in lost revenue and $288.5 to $497.4 million in property value losses.

These mussels are common in the ocean, but not in freshwater. International cargo ships first carried the invasive species into Michigan's Great Lakes in the 1980s, and from there they spread throughout mid- and southwest states.

Tom Woolf, aquatic invasive species bureau chief for FWP, said the Tiber Reservoir findings proved to be a positive for the state in terms of prevention.

"That incident put Montana where it needed to be: To be proactive on the issue, to have the prevention program, early detection, outreach and all that," Woolf said.

In 2018, the prevention program inspected 109,000 watercrafts at 35 stations across the state. Out of those inspected, 16 boats were found to have invasive mussel hitchhikers. Boats that come from outside of Montana or test positive for AIS are decontaminated with hot water, drained and cannot be used again until they are fully dry.

The mussels aren't big -- they grow to about one inch in size. But their hard shell and ability to adhere to almost any surface make them harmful, Woolf said. Mussels affect far more than lake recreation.

They can impede farm production by plugging up irrigation systems that pump water from freshwater bodies. They can make drinking water taste bad. And they could cost the state millions in damages to hydroelectric infrastructure, which could also increase utility prices.

Some say an AIS invasion is a question of when, not if. However, Woolf is optimistic the state can hold off while researchers look for treatment solutions.

"It's kind of amazing that they've stayed out this long when you look at the research in Minnesota, and how rapidly the mussels have expanded back there in the midwest," Woolf said.

In February of 2017, FWP created a new bureau, including Woolf's position, to specifically address AIS. Lawmakers also passed a bill that established an AIS prevention pass that resident and nonresident anglers are required to purchase along with a fishing license.

And while Woolf says FWP already has "one of the more robust programs" to prevent an AIS invasion, Montana lawmakers this session are introducing new legislation to combat the problem.

Speaker of the House Greg Hertz, R-Polson, is sponsoring House Bill 402, which would give county governments more control over AIS management and allow enforcement through penalties on those who don't comply with ordinances.

County officials would be able to quarantine lakes, levy taxes to pay for invertebrate and vertebrate pest control and establish local ordinances concerning AIS. Hertz said the Montana Association of Counties asked him to carry the bill, but he also said he's concerned for the future of Flathead Lake in his district.

Bill Barron is a county commissioner in Lake County and spoke in support of the bill for the Montana Association of Counties. He said the association's membership voted unanimously to endorse the legislation.

Barron said a section of the bill that would allow law enforcement to inspect boats on the roadway would help curb an AIS infestation at a county level.

"What this law really does for us is it clarifies and solidifies what a deputy can do on the road," Barron said.

However, it's not enough to have management just at the county level, said Eileen Ryce, director of FWP's fisheries division. She also spoke in support of HB 402, and said local, state and national efforts to combat AIS need to be collaborative.

The Montana Invasive Species Council reports the United States pays up to $137 million per year in mitigation costs due to AIS. Woolf said western states have been working together, and with some Canadian provinces, on the issue. But Montana is far-outpacing it's neighbor states on preventative expenditures.

Representatives from the Fishing Outfitters Association of Montana, the Clark Fork Coalition and the Montana Audubon Society also spoke in support of Hertz's bill.

The biggest concern was with the language in HB 402 that would allow counties to levy taxes to fund prevention programs.

Multiple opponents took issue with invertebrate species (invasive species) being lumped together with vertebrates for pest control, which would mean agriculture land could be taxed to contribute to funding.

Hertz said he would be open to amendments. The bill has not seen a vote yet.

Rep. Willis Curdy, D-Missoula, is in a unique position because he's sponsoring two competing bills that would fund AIS prevention at the state level.

"We have to have somewhat of a permanent way to fund the program because we sit at the headwaters of two major river systems," Curdy said.

House Bill 32 would require boat owners to buy an AIS prevention pass annually, which would have to be available on request by law enforcement. That, plus an allocation from the state's general fund, would add $6.5 million to the state's AIS fund to pay for projects like the boat-monitoring and decontamination program. The bill came out of the interim Environmental Quality Council.

House Bill 411 is similar, but would only require the annual prevention pass for nonresident boat owners, at a lower rate than HB 32 and only for motorized vessels. It would still include a one-time registration fee for Montana boat owners. It would add $5.6 million funding to the AIS fund.

At the Friday afternoon meeting, lawmakers worked to hammer out which of the bills they thought would most likely pass both chambers and receive the governor's approval. Debate will continue, but either way, both Republicans and Democrats are supportive of prevention efforts.

"I think it's an expectation that this is something Montana is going to deal with for a long, long time," Curdy said.

As it stands now, boats traveling on Montana's roadways have to stop at inspection sites. Occasionally, this results in decontamination of a boat, but it depends on the situation.

Rep. Joe Read, R-Ronan, is carrying House Bill 608, which would require all boats with ballasts or bladders be decontaminated no matter the circumstance. These types of boats take in more water than a kayak or a drift boat, and are more prone to carrying invasive species.

Not every FWP field station that inspects boats has the capability to decontaminate, because it takes a lot of hot water. Boats would be diverted to an FWP regional office or station.

Read is a farmer, and said he's worried that AIS would hurt his business by damaging irrigation systems.

"I'm doing this as a self-protection thing because I live in the Flathead (Valley) and we irrigate with water, and a lot of people don't know that (farmers) pump water out of the Flathead River," Read said. 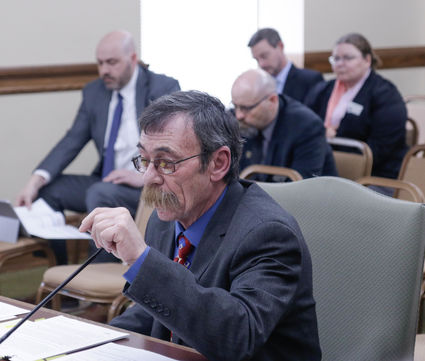 FWP, Montana Trout Unlimited and the Confederated Salish and Kootenai Tribes voiced support for HB 608 during a public hearing last week. No one spoke in opposition.

On top of these provisions, Woolf with FWP said one of the most important parts of prevention is education. He wants everyone living and traveling in and out of Montana to know the dangers of AIS, and to take the necessary precautions.

"It's really important that (people are) aware that when you come, you have to get inspected to make sure you're not moving any critters around."

Shaylee Ragar is a reporter with the UM Legislative News Service, a partnership of the University of Montana School of Journalism, the Montana Newspaper Association, the Montana Broadcasters Association and the Greater Montana Foundation. Shaylee can be reached at [email protected]