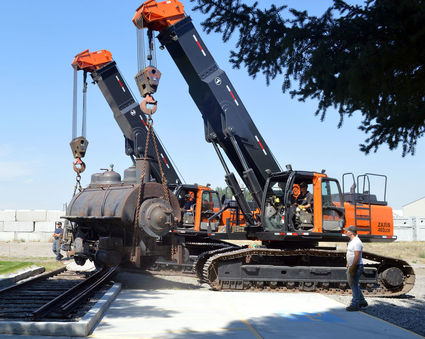 An eight-year project came to fruition last week as the "Trident Steam Engine" was delivered to its new home on the tracks on the east side of the Railroad and Trident Heritage Center in Three Forks.

Shortly after the arrival of the steam engine from Nevada City, an emotional Pat Townsend of the Three Forks Historical Society said it had been eight long years to get to this moment, but it was finally here.

According to Townsend, the history of the "Vulcan" engine dates back to the construction of the Panama Canal. Townsend said the late Ray Lau who worked at the Trident Cement Plant told her the engine was used in the construction of the canal, would then be used at a cement plant in Redwood City, California before finally making its way to the local area. She said it was used at the Trident plant in the quarry area to haul rocks around. Townsend recalls a story from her husband Gene who remembers one time with trying to light a fire on the engine to get it to started and being stopped by the plant supervisor. Pat said Gene got in trouble from the supervisor, but probably in a lot more trouble from his mother.

After the Trident plant would modernize, Townsend said this is where the story on what happened with the steam engine and how it ended up in Nevada City gets vague. 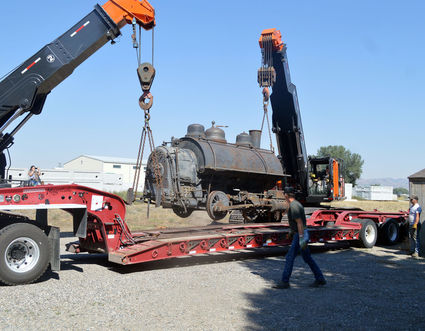 The project to bring the engine to Three Forks began after the Historical Society received an email from someone who had heard they were moving the Trident Depot to its current location in Three Forks. Townsend said the person who sent the email was from New York and encouraged them to look into getting the steam engine and would later find out it was under the privy of the Montana Heritage Commission.

"We have been working on this for eight years to get permission from them to let us have it on permanent loan. I am beyond excited. I can't tell you how happy we are that is here with the depot," she said. "Just the fact that it was used in Trident, and our depot building was out there is so important. Our museum is called the Railroad and Trident Heritage Center and we feel this engine is part of that history. We never gave up believing we would get it."

Historical Society members also gave thanks to the Roadarmel family for bringing the engine from Nevada City to Three Forks.