The Three Forks School District will soon have a new Superintendent.

According to Elementary School Principal Steve Fanning, Rhonda Uthlaut was offered the job Monday, and she accepted. The School Board must officially approve at a special meeting March 4.

Uthlaut will take over for current Superintendent Jeff Elliott, whose last day on the job is June 30.

The Three Forks School Board and Administration met last week to review four applicants and selected Uthlaut and Nick Schumacher as the two finalists for the position.

A busy day for both candidates on March 1 included administrative team interviews, board of trustee interviews, staff forums, and a community forum that was open to community members and streamed on Facebook Live.

Uthlaut is currently serving as the Missouri Director of School Improvement at the Missouri Department of Elementary and Secondary Education in Jefferson City, Missouri. She has worked in this capacity since November of 2020.

Schumacher currently serves as the District Superintendent for the Plevna School District. He has held this position since 2018.

At Monday's forum, both candidates were asked why they want to lead the Three Forks School District and what they see in the community and district that interests them.

Schumacher said three years ago that he and his family stopped at Headwaters State Park and spent a few days in the area on the way to his new job in Plevna.

"We got into the community, and we just thoroughly enjoyed our time and ourselves. At that point three years ago, we made the decision that should this position come available that we would look into it. Low and behold, here we are," he said.

After hearing of the opening and researching the district, Schumacher said what specifically excited him was the first goal of the district strategic plan to meet the needs of the kids.

"It's a place that we want to be with values that are aligned with our own, and we feel it would be a good transition for the Schumacher family," he said.

A Missouri resident, Uthlaut has family in the area and has been planning a move to Montana. 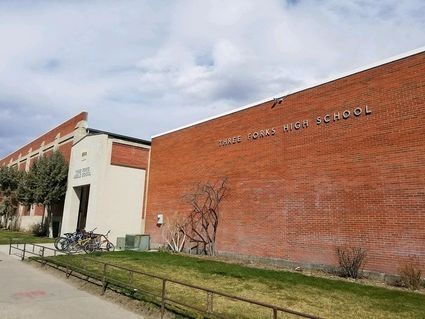 "I'm looking to put down roots in a community where I can build a life and stay. I'm looking for a district and community where I can build relationships and enjoy time being connected with staff, students, and the community," she said. "I'm very interested in Three Forks. I have family members, and that was the initial draw to the area. But when I first visited a year ago, I was very drawn to it. I've listened to live feeds from board meetings, and I've gotten to know some of the staff. I feel like it's the size of the community that I would like to be part of," she said.

Uthlaut previously served as Assistant Superintendent of Curriculum and Instruction for Belton School District No.124 in Belton, Missouri. She served in that capacity for three years. Uthlaut also served as Principal at Grace Early Childhood Care and Education Center in Belton for 14 years. Altogether, she has served in education for over 30 years, 10 of those as an elementary school teacher.