NRCS: December Precipitation Improves Conditions After a Dry Start to the Water Year 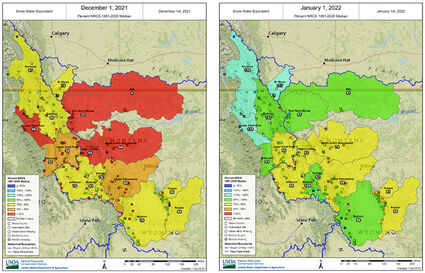 Following two months of below normal precipitation across most of Montana, snow was welcomed during the month of December. October and November did bring above normal precipitation to portions of southwest and northwest Montana; however, uncharacteristically much of it was rain. As of Dec. 1, the snowpack measured by the Natural Resources Conservation Service's (NRCS) SNOTEL network was below normal across the state. Fortunately, in December, shifting upper-level circulation brought Arctic air into the region, which collided with moisture from the Pacific and finally delivered much needed snowfall. Most of Montana received well above normal precipitation in December. The northwest corner of Montana received record precipitation. As of Jan. 1, the snowpack west of the Continental Divide is overall above normal, while the snowpack east of the Divide is overall below normal, with central Montana faring the worst.

"While the recent snowfall is encouraging, it is still too early to tell what this winter will bring in terms of seasonal water supply," said Mage Hultstrand, NRCS Data Collection Officer for Montana. "The snowpack in Montana typically peaks in mid-April, and at this point any snowpack deficits could easily be recovered in a single storm."

The next two to three months will start painting a picture of potential spring runoff. Regardless of current conditions, above normal moisture would be welcomed in the upcoming months, particularly following the exceptionally dry summer Montana experienced in 2021. Much of Montana is currently under drought designation, with central Montana needing the most improvement. Spring is historically when the bulk of annual precipitation occurs in many basins east of the Continental Divide. All being well, that will hold true this season.

A full report of conditions on Jan. 1 can be found in the monthly Water Supply Outlook Report available on the Montana Snow Survey website. In addition, real-time snow survey data can be found at https://www.nrcs.usda.gov/wps/portal/nrcs/mt/snow/.